Therefore confess your sins to each other and pray for each other so that you may be healed. The prayer of a righteous person is powerful and effective. (James 5:16 NIV)

Five years ago I was in a hospital waiting room, patiently waiting for my surgery to begin. It should have started hours ago, but for some reason it was delayed. This procedure was the completion of another surgery from three days prior. For someone with a connective tissue disorder like me, it required two procedures because my insides were rather fragile.

As directed, I had waited the three days necessary between the two surgeries, and returned promptly to the hospital that morning so my surgeon could finish what she had started, repairing my ruptured carotid artery.

Because it was pre-surgery, I wasn’t allowed anything in my stomach, which included pain medications. As the pressure behind my eye surged, I grew terribly uncomfortable still waiting through this, what seemed like never-ending, delay. A flustered nurse rushed in, announcing that among all the patients in the hospital’s extensive record system, my digital record had mysteriously disappeared. This glitch had never happened before, she could not explain it and didn’t know how to remedy it. The surgical team would not proceed without a working digital record, so my husband and I were left to wait a little longer…

Have you ever been in a dilemma where there was no earthly resolution? For reasons that we cannot understand or explain, some problems we are up against just will not be solved by human action. In every situation, and especially those kinds of situations, we’ve got to take our earthly action to the heavenly realm. Human problems need divine intervention.

I leaned toward my husband and whispered, “God needs His people to pray”.

He nodded and walked to the family waiting room, where he asked his sister to spread the word that we needed immediate prayer to recover my digital record.

I was in surgery within the hour.

My medical team was baffled. And to this day we don’t have an answer as to where my digital record went or how it reappeared, but the problem was fixed as soon as God’s people started praying. I learned later that at the mention of our prayer request, family and friends walked around the hospital, not unlike Joshua circling the city of Jericho, asking God to fix this unfixable problem.

Prayer is powerful. Prayer fixes our earthly problems. If you are facing something today that holds no foreseeable resolution, would you allow God to stretch your prayer habit? Pour out your heart to Him. God hears and responds to His children. He is faithful to see His will accomplished on this earth and He will not fail you today.

Father, thank you for the privilege of prayer. Let me seek you in every situation I face. 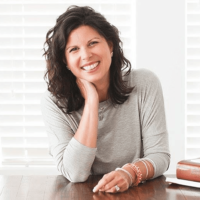 Heather M. Dixon is an author, speaker, and Bible teacher who understands living with a story that is not easy. Diagnosed with an incurable and terminal genetic disorder that she inherited from her mother, she is passionate about encouraging and equipping women to trust in God, face their greatest fears, and live with hope, especially in the midst of difficult circumstances. When she is not blogging at The Rescued Letters or speaking at women’s conferences and events, Heather loves to make the most of everyday moments such as cooking for her husband and son, brainstorming all the possible ways to organize Legos and superheroes, checking out way too many library books, or unashamedly indulging in her love for all things Disney. Heather is a regular contributor to Journey magazine and the author of three Bible studies including Determined: Living Like Jesus in Every Moment and Renewed: Finding Hope When You Don’t Like Your Story. Her fourth Bible study will be released in 2022.